50 cases gone in a flash 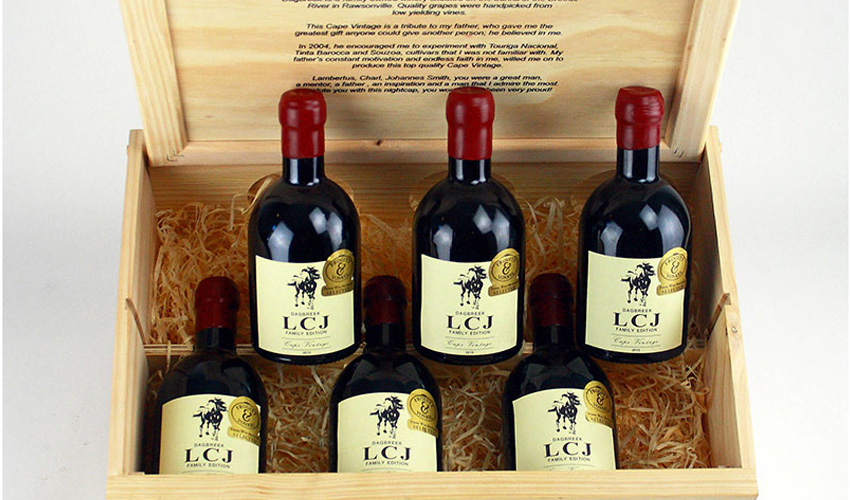 One of the joys of specialising in small producers and boutique estates is the occasional access we have to unique, once-off products. We are always on the lookout for such items, and take great excitement in sourcing them and providing them for our private customers.

A chance meeting
Two years ago, while at The Wine Show in Jo’burg, an enthusiastic gentleman named Peet Smith excitedly invited us to sample a bottle of some Cape Vintage that he had made. Intrigued, we duly tasted his offering and though the liquor was still maturing, it was fantastic!

Rich, balanced but complex, it had that extra warm heat of a fortified wine but without a hint of alcohol burn on the palate. Naturally, we immediately offered to buy the entire barrel exclusively for Frogitt & Vonkel, but to our surprise Peet flatly refused to release it to us, saying that it was a tribute to his father and so it had to be 100% perfect before he would be prepared to sell it.

Worth the wait
We agreed to wait for Peet’s go ahead as we sell several a number of other wines of Peet’s and could make sure we enquired about the Cape Vintage whenever we spoke. Two years slowly ticked by and then one day, out of the blue, we received a call from Peet. He was now finally happy to share his creation with the world and so we bought all of the cases he had available and began contacting our clients.

50 cases sold in a flash
Only 50 cases were produced in total and the wine remained in stock for just one afternoon! A complete sell out, our discerning Frogitt & Vonkel customers snapped up these stunning limited-release wooden cases of Dagbreek ‘Cape Vintage’ (aka “Port” until recent legislation) in less than four hours!

A tribute to his father
The story behind the Dagbreek ‘Cape Vintage’ wine is one of heritage, love and beauty. On the encouragement of his father, owner/winemaker Peet Smith, a third generation wine maker, began growing and making wine from Portuguese varietals; Touriga Nacional, Tinta Barocca and Souza in the late 2000’s after he opened his Breedekloof Valley based boutique cellar in 2008.

This particular wine was produced as a tribute to Peet’s late father and mentor – a father who encouraged his son to try new techniques and travel the road less travelled. Named LCJ – his father’s initials, the wine is packaged in quaint, pot-style 375ml bottles with the labels, corks and wax seals all being applied to each individual bottle by hand.

Presented in wooden cases that are all bespoke made, the Dagbreek LCJ ‘Cape Vintage’ label design is printed on the outside of the wooden lid with the story of the wine printed on the inside. The cases themselves are reusable, with wooden hinges and leather strap details.

Continued success
We look forward to seeing what Peet will produce next as he continues to create award winning wines, collecting numerous Gold medals over the last few years from the Michelangelo Awards – Peet’s competition of choice.

If you would like to be contacted about similar premium wines when they become available contact us today and your Private Wine Merchant will be happy to assist you.