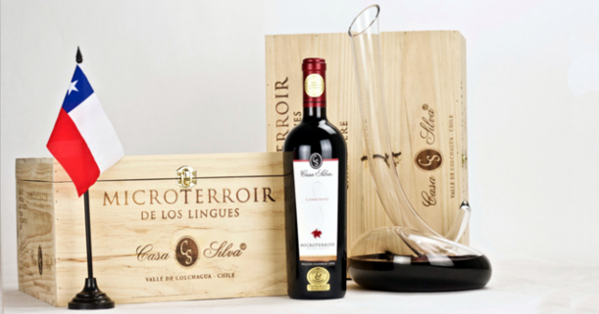 If Germany is Riesling, Burgundy is Pinot Noir and New Zealand is Sauvignon Blanc, then Chile is Carmenère.

*Casa Silva is 100% family-owned and managed, and the most awarded Chilean winery in the world. They were the “Chilean Winery of the Year 2013”.

*This Micro Terroir Carmenère won “Best Carmenère of Chile Trophy” at the recent Concurso Internacional del Carmenère, an annual contest of over 600 wines.

Part of the “Micro Terrior Project”, started by Casa Silva’s Technical Director and Chief winemaker in 2005 in conjunction with the University of Talca, the wine is from parcels of between 0.1 and 0.5 Hactares identified as producing the best fruit. Each parcel within the Los Lingues vineyard at the foot of the Andes mountains in the Colchagua Valley.

Carmenère has its modern origins in Bordeaux, where the grape was used to produce characterful wines to be used in blending much like Petit Verdot. Some analysts say the varietal is a clone of Cabernet Sauvignon, however the jury is still unconvinced of that claim. What is certain is that Phylloxera wiped the cultivar from the map in France in the late 1800’s. It remains however recognised as one of the 6 varietals in the original Bordeaux blends.

The grape has thrived in South America, especially in Chile and today represents some of the countries very finest wines, and a good percentage of it’s easy-drinking reds too.

We’re very lucky to have a small allocation available for our customers here is SA, made available to us only because of the other Casa Silva wines we import.

The presentation is fitting of such an example of excellence. Premium wooden cases with latch-closing lids, and heavy bottles with long cork and large punt for good ageing. Each bottle is hand-wrapped with tissue.

Here’s your opportunity to own and enjoy not only the “best Carmenère” produced in Chile, but to taste how micro-terrior impacts a varietals complexity and elegance.

If the price-tag isn’t to your budget, we’ve also stocked the delicious Carmenère 2015 from Casa Silva’s ‘Coleccion’ at a more budget-friendly R215 per bottle sold in cases of 12 bottles.

If you fancy exploring some fabulous hand-crafted small production wines from south Africa or abroad, why not speak to one of our specially trained Private Wine Merchants?