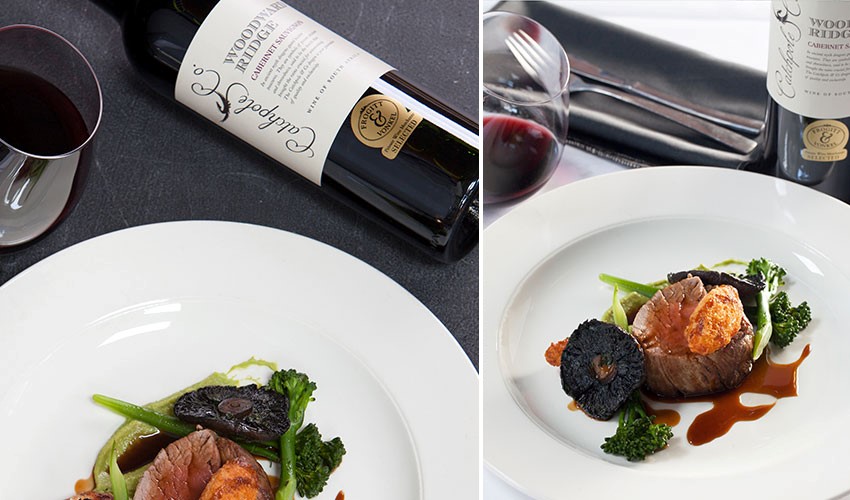 A classically-styled Cabernet Sauvignon like our Woodward Ridge demands a classic meal to go with it such as the family favourite – roast beef. When our resident Frogitt & Vonkel chef; Craig Cormack tasted the wine he was inspired to create a simple yet delightful version of the classic roast which is the recipe we present you with today.

We love: The black fruit and cigar-box flavours and aromas of the Catchpole & Co. Woodward Ridge Cabernet Sauvignon work incredibly well with beef. Plenty of flavours abound whilst at the same time leaving the meat to speak for itself.

Just the recipe for the potatoes will bring out the inner chef in you!

Alternative pairings: Although this dish was written specifically for the Woodward Ridge Cabernet, you can also enjoy it with any good Cabernet Sauvignon such as the Cabernet Sauvignon from our flagship estate – Major’s Hill located in the Robertson region in the Western Cape.

Season the meat with salt.

Heat the oil in a roasting pan over high heat.

Add the beef and cook, turning occasionally, for 6 minutes or until brown all over.

Roast in oven, basting regularly with pan juices, for 15-20 minutes for medium-rare or until cooked to your liking.

Roast mushrooms for 20 minutes stirring occasionally until the mushrooms are browned.

Season with salt and chopped parsley.

Bring some beef stock or the pan juices to a boil in a pan and then simmer until the liquid is reduced by half.

Broccolini – trim the base and peel to give a pro finish.

Place in a pot of boiling water and blanch till firm.

Peel the potatoes, cut into cubes then boil until soft.

For the choux paste:

Bring the water, salt and butter to a boil in a saucepan.

Remove from the heat.

Add the flour and mix in with a wooden spoon.

Return to a moderate heat and stir continuously until the mixture leaves the sides of the pan.

Remove from the heat and allow to cool.

Add the butter and egg yolk to the warm mashed potatoes; mix well.

Mix the choux mixture and the potato mixture together, making sure they are well combined.

Mould the mixture into cylinder shapes (or quenelle them using two spoons).

Sauté onions for 10 minutes. Add peas and 300ml of water in a pot and steam for 7 minutes then blend immediately and pass through a fine sieve, season well.

You can buy the Woodward Ridge Cabernet Sauvignon here, or why not chat to a Private Wine Merchant™?