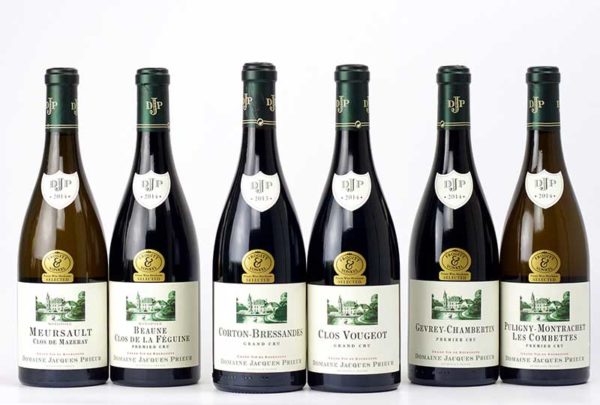 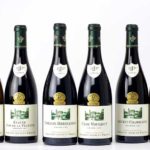 An extremely rare opportunity to taste through 6 different Domaine Jacques Prieur wines, each from a different vineyard (and “ward”). These “Power-Packs” have been assembled to allow Burgundy explorers the opportunity to cover a wide range of styles, all from premier sites in Burgundy, within a single 6 bottle pack.

An extremely rare opportunity to taste through 6 different Domaine Jacques Prieur wines, each from a different vineyard (and “ward”). These “Power-Packs” have been assembled to allow Burgundy explorers the opportunity to cover a wide range of styles, all from premier sites in Burgundy, within a single 6 bottle pack. Jacques Prieur is widely hailed as one of the most sought-after Domaines in Burgundy. With 51 acres of vines across 22 appellations… a number unmatched by any other grower. The actual Domaine was founded in 1870, although Jacques Prieur (a co-founder of the famous Chevaliers du Tastevin) gave his name to the estate in 1956. Whilst steeped in history, their vineyards have been farmed organically since 1997 and bio dynamically since 2009, although the wines are not labelled as such. As with most Top Gun producers in Burgundy, even should you be lucky enough to gain entrance and a tour of the cellar, the wines are simply not available for sale. Every single bottle is allocated. Luckily for us, one recipient of an annual allocation is Alex Dale from The Winery of Good Hope. It’s through Alex’s generosity that we’re able to assembled just 4 of these Power-Packs.

‘Prieur Power-Pack’
A rare collection of difficult to obtain top-flight Burgundies from one of the Kings of Burgundy. Perfect examples of Chardonnay and Pinot Noir spanning Premier and Grand Cru’s.

Each Prieur Power-Pack contains one bottle each of the below. The wines were chosen to give the owner a taste of the finest Chardonnays (two bottles) and a wide range of reds (4 bottles). There’s Premier Cru (2 bottles), Grand Cru (2 bottles) and even two Monopole’s. All are exceptional “best of best” examples of both cultivars, and Burgundy as a whole.

Meursault Clos De Mazeray –Monopole
A “Monopole” importantly means a “monopoly” whereby a producer owns the entire area designated. This could be a single vineyard or an entire village.
In this instance it refers to an historical walled vineyard within the famous village of Mersault. Originally planted by the monks of Citeaux, the site occupies what was once a riverbed and is rich in clay. The vineyard produces both Chardonnay and some Pinot Noir and is a coveted ‘Monopole” for Domaine Jacques Prieur.

Puligny Montrachet -Les Combettes- 1er Cru 2014
Puligny Montrachet, for many, is the quintessential white Burgundy, if not Chardonnay. This is wine from some of the finest terroir for Chardonnay in the Cote de Beaune, Southeast facing, overlooking the picturesque village of Puligny Montrachet itself. It’s a small 1.5 Hectare plot, clay-limestone soil with a high proportion of stones, which is conducive to excellent ripeness.

Beaune –Clos De La Feguine 1er Cru 2014
Clos de la Fèguine, a 1er Cru vineyard is perched on a very steep portion of a south facing hillside. Entirely owned by domaine Jacques Prieur, thus a Monopole, the terroir is exceptional and is located on the site of a former quarry, with silty soild ideal for Pinot Noir and excellent drainage. This is the perfect wine to explore exactly why Burgundian Pinot Noir is sought-after the world over, and why Prieur are considered one of the best producers of the region.

Gevrey Chambertin 1er Cru 2014
A famous appellation. This is a 1er Cru through choice. There are 4 parcels of Grand Cru vines, those which are 40+ years go to the “Grand Cru” and the younger ones are sent to the 1er Cru. This is virtually unheard of in Burgundy, however a Prieur have such a large percentage of their production going to Grand Cru the can afford standards others simply can’t. As a result, for the drinker, it offers great value for money. The soil is rich in organic and mineral material, and clay. Vines are old and densely planted to encourage competition amongst the vines, limiting yields and producing fruit of great concentration.

Corton Bressandes Grand Cru 2013
Situated on the hill where the Grands Crus of Corton are located. The south-east facing vineyards and slight slope ensure perfect ripening. Soils are heavier here than further uphill consisting mainly of clay and small amounts of limestone. Aged entirely in oak barrels for 19 months.

Clos Vougeot Grand Cru 2014
The crowning glory of the Power-Pack. This 50-hectare clos (walled vineyard) was created by the Monks of Cîteaux. Their cellar was located in the Château du Clos Vougeot, which is now the headquarters of the Confrérie des Chevaliers du Tastevin. Produced in extremely small quantities of mostly 750ml bottles with a few (unobtainable 1.5L) magnums. The wine ages for 17 months in oak barrels deep in the cellars of Domaine Jacques Prieur.